On Thursday 12th December Tanbridge House School held their Class of 2019 – A Celebration of Achievement Evening (sponsored by DMH Stallard). During the evening ex-students were able to collect their GCSE certificates, have refreshments and catch up with staff and friends before attending the presentation of awards hosted by Mark Sheridan, Deputy Headteacher/Senior link for the Year Group.

Kristian Hunt, the Leader of Year for the Class of 2019 welcomed everyone to the event including Marissa Allen from DMH Stallard who have been main sponsor for the event for many years. The students enjoyed listening to the head boy and head girl’s speech given by Alice French and Bob Griffiths. After the subject awards being displayed in a video and several other areas of recognition, a new award – THS Role Model Award in Memory of Will Hallett was awarded to Lorna Macrae and Scott McMullan.

After some music from the Chamber Choir, Morgan Chambers, Chair or Governors presented the Governors’ Award for Outstanding Commitment to THS (staff) which was presented to Sue Ely, who has worked at THS for many years. A thank you was also made to the outgoing Chair of Governors Judith Harding who had been in position since 2014.

The final part of the presentations included the Prize for Apprentice which is generously supported by Horsham Rotary Club and went to Callum Barrett who has started his apprenticeship at an engineering firm.

The final presentation was the Leslie Prize for Outstanding Academic Achievement and Contribution to School which was awarded to Amy Horne - a well-deserved winner who achieved fantastic results and contributed greatly to school life. Jules White, Headteacher, concluded the evening offering his congratulations to the year group for their results, as well as passing on his thanks to the Governors for their continued support, the teaching staff for their dedication as well to Kristian Hunt (Leader of Year), Laura Vaughn (Assistant Leader of Year) and Jill Hawkins (Pastoral) 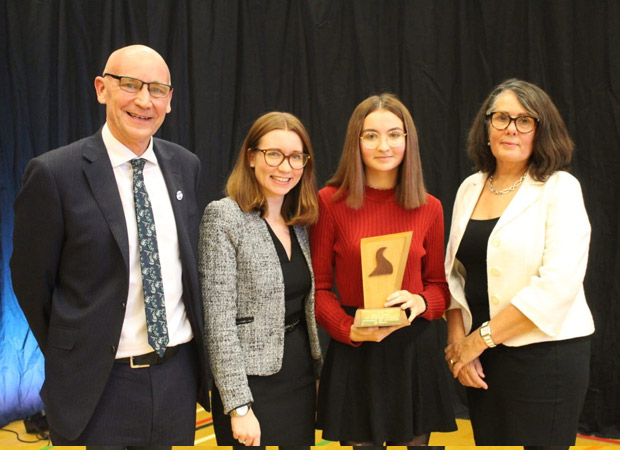